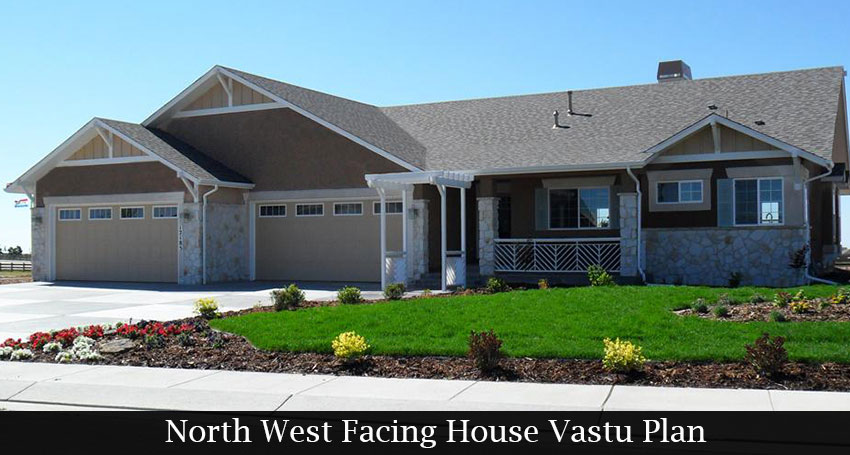 This needs the high intelligence to draft a layout plan for a north-west facing lot because logically this is the last or the least preferred direction from southern hemisphere point of view. The person who has already bought the North West Facing plot or lot should be very much aware of the fact that this direction-house needs the maximum attention because of the rotation of the sun. North West Facing House Vastu Plan should adhere all the fundamentals of vastu and then interior of the houses should also be done as per vastu defined by Dr. Anand Bhardwaj. Now if the drawing or layout plan of the house is finalised properly then automatically the house made upon a north-west facing lot shall be full of positive energies.

If some one is true vastu believer then only he should contemplate to design his dream house as per vastu. North West Facing House Vastu Plan can be one which after completion will be appreciated by the guests, friends and relatives when they may find the comfort level at the highest in this house made keeping in view all the essential vastu principles for southern hemisphere.

When we talk about the varieties of facings then we realise that there are houses in all the directions and so North West Facing House Vastu Plan needs the different aesthetic and Vastu precautions to design the layout plan which comes under the domain of Vastu for House Facing in Southern Hemisphere that is specifically North-west Facing House Vastu Plan. In this course of action, we have to take care that western directions should be kept as heavy as possible. At the same time while designing the Vastu Plans, Vastu House planning and applications of logical and scientific Vastu in Southern Hemisphere. North-west Facing House Vastu should define the master’s bedroom in the north-west because there is a big difference in the sun’s movement. Vastu House Plans for various countries and continents like in New Zealand, Australia, Indonesia, south Africa, Argentina and brazil etc should follow all the Vastu tenets applicable on Southern-Hemisphere Vastu Shastra.

There is not only one design as per Vastu for all over the world but the local administration and authorities have decided to create the similar ambience for the entire areas. If we say that Vastu is the science and wisdom of energies that guides us to protect from the negativities and in turn we may enjoy the fruitful directions defined in Vedic Vastu Shastra. Vastu in Southern Hemisphere that includes various rules and regulations and applied in all the small and big countries like Mauritius, South Africa, Australia, New Zealand, Chile, Brazil & Argentina etc. We have worked on Vastu for a lot of cities located in the Southern Hemisphere like Perth, , Canberra Port Louis, Jakarta, Brisbane, , Queensland, Sydney, Victoria New South Wales (NSW), Indonesia and other many cities. The best Vastu consultant may analyse everything and then defines the layout plans and their interiors as per Vastu. etc.